Reading the Room: Compassion in the Field of Journalism

Imagine this: you discover that your 14 year-old son is dead. His body has just been found floating in a creek with 31 stab wounds, after having been missing for nearly a month. You are distraught. However, just two days after his body is recovered, people come flocking to the funeral parlor where your son is resting, microphones in hand—shoving them into your face. And here comes the punch line: they ask, “Why do you think your son was killed?”

This was exactly what happened to Lina Gabriel on September 7, 2017, when GMA-7’s Unang Balita held a live field interview only days after her son, Reynaldo “Kulot” de Guzman, was found dead in Gapan City, Nueva Ecija (CMFR, 2017a). Kulot had been previously accused of drug possession, robbery, and other crimes. As a result, controversies concerning her son’s involvement in numerous misdeeds filtered through, attempting to ensnare the woman in a vulnerable situation. Questions like “Are the stories about your son being a hold-upper true?” or “What other crimes did he and his friend group commit?” were asked during the interview, leading Gabriel to answer the questions inconsistently and nervously (CMFR, 2017a).

Earlier in July of the same year, a reported suicide in the campus of the University of the Philippines - Diliman published by The Manila Times included a full-color, graphic photo of the victim’s body, a man from Tandang Sora, Quezon City, hanging from a rope followed by the caption: “GRIM.” (CMFR, 2017b). Not only did the act of publishing an image of the victim still hanging on the rope rob them of the necessary respect and dignity they deserved, it also sensationalized the tragedy and did absolutely nothing to improve the article itself (CMFR, 2017b).

Moreover, this culture of insensitivity lives on at present. A prime example would be GMA news reporter Tina Panganiban-Perez's questions for Ana Patricia Non, the founder of the Maginhawa Community Pantry (Serato, 2021). On April 20, 2021, during Non’s press conference through Zoom, Perez asked “Do you have links to communist groups?” in which Non responded with a negative and criticized it as “dirty” journalism (Serato, 2021). Prior to this, the Maginhawa Community Pantry had been temporarily closed due to an incident of red-tagging. The issue with the question is ultimately the direct persecution of the organizers of the pantries and the harm that may befall those benefiting from their help (Inquirer, 2021).

These are just a few examples out of a wide breadth of scenarios where journalists have overstepped their boundaries and failed to read the room in their attempt to get an exclusive on a story. This is what Camille Diola, Editor-in-Chief of Philstar.com and Interaksyon, had to say in a thread of tweets: 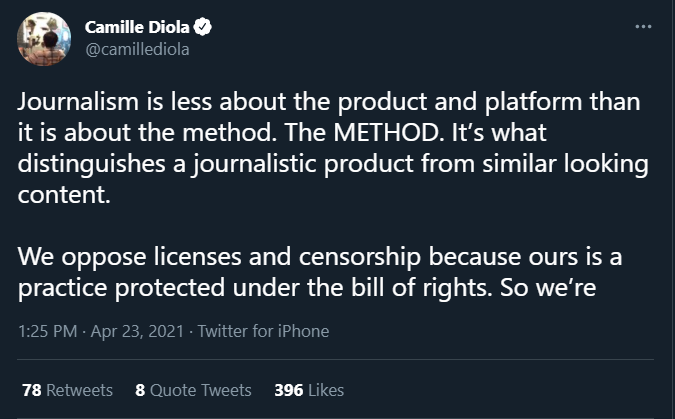 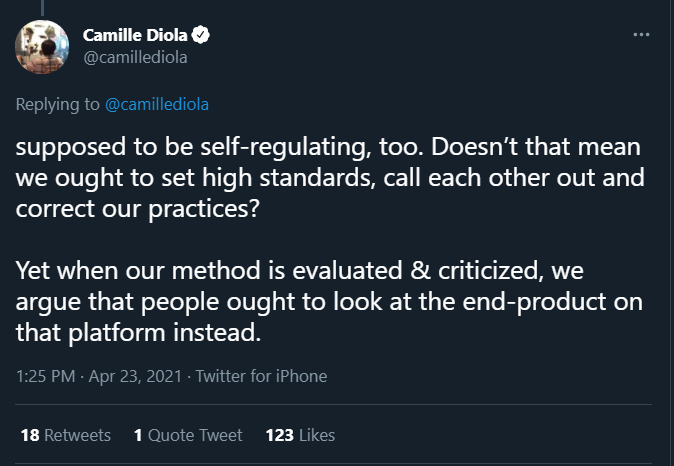 Journalism, more than anything, should be written by the people and for the people. In doing so, it is also important to recognize not only the finished product, but also the method the journalist went through in order to compile that information. When journalists start becoming unethical, hasty, and unregulated in terms of how they get their information, there is an increasing need to reconsider what this means for our community. Especially as advocates for the truth, there are ways to produce journalistic content without resorting to unethical, uncompassionate, and ignorant means. By acknowledging where journalists have gone wrong and then proceeding to correct themselves, journalism as a whole in the Philippines may eventually grow into something much larger and much more fulfilling than what it was before and is today.

CMFR. (2017b, July 17). Insensitive Use of Victim’s Photo: Sensationalizing a Tragedy in a Public Place. https://cmfr-phil.org/media-ethics-responsibility/journalism-review/insensitive-use-of-victims-photo-sensationalizing-a-tragedy-in-a-public-place/

Inquirer. [@inquirerdotnet]. (2021, April 20). Currently facing the dangers of red-tagging (most notably by NTF-ELCAC), Non explained that such accusations do not only endanger the [Tweet]. Twitter. https://twitter.com/inquirerdotnet/status/1384403556229214208